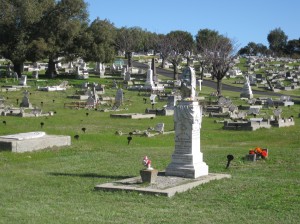 In 1902, the Bunbury Municipal Council met to discuss prospective sites for establishment of a new cemetery.  They recommended that a Cemetery Board be appointed.  The WA Government Gazzette of March 1912 noted allocation of a reserve for use as the Bunbury Public Cemetery.  The Municipality of Bunbury was appointed trustee under the Cemeteries Act, 1897.

On 27th June 1914 the Bunbury Cemetery Board declared the site a public cemetery under the Cemeteries Act 1897. (Any further interments at the Anglican, Roman Catholic and Congregational cemeteries were to cease from 1st July 1914)