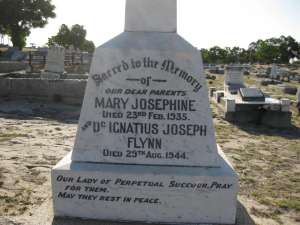 Doctor Ignatius Flynn completed his Medical Studies in Edinburgh, Scotland and emigrated to Fremantle in 1894, after accepting a 12 months Locum position.

He returned to Dublin in 1895- 1896 to study for his Doctorate in Medicine at Trinity College. After Graduation he travelled to Bunbury in 1898 to continue practicing Medicine.

Doctor Flynn subsequently enlisted in the Boer War ( Fifth Contingent ) with the rank of Captain, serving from March 1901 to May 1902 in South Africa.

The Bishop of Bunbury  made it clear to Doctor Flynn that women of the Colony preferred to be attended by a married Doctor. In 1907 he returned to Ireland to find a wife, and married Mary Josephine O’Ryan, 20 years his junior.

In 1912 with his wife and 3 children, he sailed again for Bunbury. He built a large home at Stirling Street Bunbury which he and his wife  shared with their 12 children.

Doctor Flynn was both the Commonwealth Medical Officer and the District Medical Officer. He practiced Medicine until his death in 1944 at 75 years of age.

Doctor Flynn is interred with his wife in the Bunbury General Cemetery.