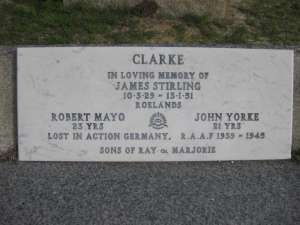 John was born to parents Raymond Arthur Clarke and Marjorie Cecil Clarke ( nee Clifton ) on 13 June 1922.  He left  Bunbury  High School in 1938 and worked on an apple orchard in Capel.  When the Second World War broke out, John enlisted in the 10th Light Horse Regiment based in Bunbury.

John  then enlisted in the Royal Australian Air Force on 21 July 1941, and after gaining his wings in Western Australia, was posted as a Pilot to the United Kingdom. He flew Halifax Bombers, and after his 15th operation was promoted to Pilot Officer.

Unfortunately, on the night of 28 August 1943, John’s aircraft was shot down by a night fighter en-route to Nurenberg, Germany. Three of his crew were also killed by the cannon fire, whilst the remaining three crew were able to parachute safely to the ground.

John was only 21 years of age and is buried in the Rheinberg War Cemetery near Cologne, Germany ( refer details above ).