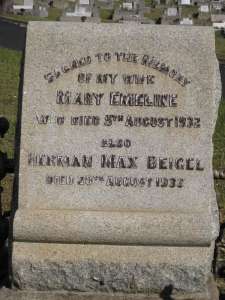 Harry Beigel was a Master Mariner who arrived in Bunbury in about 1899 and worked to set up a Bottling works. In 1902 he built Beigel’s Brewery which won a National Award for the quality of its beer in 1905. Unfortunately the Brewery eventually went into liquidation and closed for business in 1916.

Harry negotiated to purchase the local Stokes Aerated Waters business in 1920 and changed its operations into a Wine and Spirit  business.

Beigel had been the Chairman of the Bunbury Harbour Board in 1909, when it conducted its inaugural Meeting.  He was later appointed as a Member of the Bunbury Municipal Council in 1915 and was universally acknowledged for his dedication in support of Australia’s World War One efforts.

Harry Beigel was remembered also as having an abrasive character who always spoke his mind on public matters.

He is interred, together with his wife and young son in the Bunbury General Cemetery.