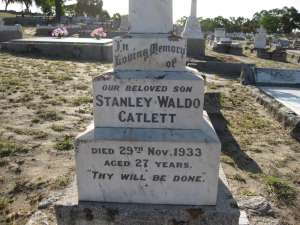 Stanley Catlett was born and raised in Bunbury, son of a local Watchmaker and Jeweller. He showed an adventurous spirit from a young age and was gifted with strong athletic ability.

Stan successfully competed in Motorcycle events from 15 years of age and travelled to Britain in 1927 to become one of the top Australian riders on the English Speedway circuit. He was appointed Captain of the Wembley Speedway Team, and achieved hero status on both the English and Australian speedway tracks from 1927- 1932.

Stan had completed a mechanical apprenticeship in Bunbury, prior to embarking for England and his highly tuned skills were always in strong demand. During 1933 , he had built a garage and workshop in Bunbury from funds earned from his speedway career.

Whilst in Perth to secure Stock , prior to the official opening of the Garage in December 1933, Stan acquired an Australia Aero Club Moth and flew to Bunbury. When preparing to return to Perth at the completion of his visit, it is said that Catlett  was approached by a young man, Colin Teede, to undertake a short joy flight over Bunbury, prior to departure.

Unfortunately, during the flight, the plane had a mechanical failure and fell to the ground at Picton Junction. Both Catlett and Teede were killed in the accident. It was later revealed that Catlett only had a British Pilot’s licence and did not have authorisation from the Aero Club to use the plane. This incident on 29 November, 1933 remains Bunbury’s only fatal plane crash.

Stanley Catlett is interred in the Bunbury General Cemetery.