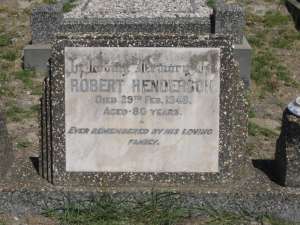 Robert Henderson arrived in Western Australia in 1894 from Ontario, Canada. He is acknowledged as the owner of the first Motor Car to be seen in Bunbury.

“Yankee Bob, as he was known, purchased a property in Victoria Street, near the Burlington Hotel, which became Henderson’s Coffee Palace, a boarding house, and home to his family.

He initially set up a carrying business, then Horse Cabs and eventually motor cars for the first Taxi service operating in Bunbury. His Victoria Street home acted as the depot for his expanding transport and taxi businesses. Further business growth required re-location to a new home and depot in Clifton Street, near today’s Lighthouse Beach Resort.

Bob saw the need to cater for Bunbury’s expanding population, and built and operated the first local bus, with services from Bunbury to South Bunbury and Rathmines ( Henderson Motor Service ). Numbers in the bus fleet grew rapidly and Bob Henderson set up new premises in Spencer Street, which are still in operation today, by Loves Bus Services.

Bob continued to build buses until his death on 29 February 1948, at the age of 80 years, and is interred in the Bunbury General Cemetery.