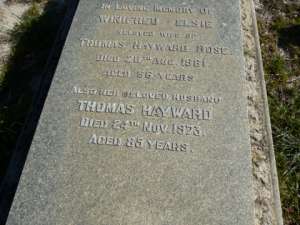 Thomas Hayward Rose was born on 16 October, 1888 in Bunbury, Western  Australia, being one of 4 boys and 3 girls of Robert Henry ROSE and  Maria ROSE ( nee Hayward ). He attended Primary Schooling at Parkfield Australind, Brunswick and Bunbury prior to transferring to Hale School in Perth for his Secondary education. In 1911, at 22 years of age, Tom cleared sufficient land with a steam traction engine to build the ” Edgehill ” farmhouse.

Tom was travelling with his good friend Ray Clarke in 1914  to Kalgoorlie for a Rifle Shoot, when they learnt that War had been declared. When the men were advised the shoot had been cancelled, they enlisted in the AIF instead of returning home. They became original  members of the 11th Battalion on 7 September, 1914 being allocated to ” H ” Company, with Tom being issued with regimental number 939.  Their ship H.M.A.T “Ascanius ” embarked from Fremantle on 31 October 1914, and left Gage Roads on 2 November to join the main convoy at sea.

Whilst training in Egypt, prior to transfer to Gallipoli, Tom Rose defeated the entire First Division of the AIF in a sniper selection shootout, with his mate Ray Clarke being runner-up. Tom was part of the First Landing at Gallipoli on 25 April 1915, and served as a sniper through until July. When the Allied Commander, Sir Ian Hamilton landed on Gallipoli for briefings and troop inspections, the AIF appointed Tom Rose and Ray Clarke as his personal security and bodyguards for the duration of his stay.

Tom Rose was awarded the Military Medal in late 1916, with the recommendation reading as follows:-
” At Gallipoli, during the period 25 April 1915  to 15 July 1915. For conspicuous gallantry. He rendered invaluable services in subduing the fire of the enemy’s snipers. At great personal risk he frequently went forward well in advance of our trenches to successfully cope with snipers who were causing casualties in our ranks. He displayed courage of a very high order “.
The Commendation was recorded in the London Gazette No. 29794 dated 20/10/1916, and the Commonwealth Gazette No. 62 dated 19/04/1917.

Rose was admitted to the 2nd Field Ambulance  Hospital with influenza, then evacuated to St David’s Hospital on Malta, before the diagnosis of Myalgia caused transfer to the Military Hospital in Fulham, England on 26 August, 1915. His recovery from this illness was quite slow, and it was not until 14 February 1916 that he rejoined the 11th Battalion in Egypt, where they were being re-organized prior to moving on to the battlefields of France.Tom was involved in the fierce battle for Pozieres , and rewarded thereafter with promotion to Corporal on 1 August 1916.
On 14 September 1916, Rose was awarded the Silver Obilich Medal ( SERBIA ),  for bravery, as set out in the commendation for the Military Medal above.

On 19 December 1916 he was evacuated to Hospital in England, suffering from trench feet. Once recovered , he transferred to Perham Downs to prepare for a return to France on 9 July 1917. He rejoined the 11th Battalion on 29 July and was in action shortly thereafter in Belgium.  He suffered wounds to his left shoulder during an operation at Glencorse Wood on 20 September 1917 which necessitated evacuation to England.  He had been initially treated at the Canadian Hospital in Outrean, Belgium after recovery, by the 6th Field Ambulance and being monitored at the Casualty Clearing Station.

Tom sufficiently recovered at the Bethnal Green Hospital in London, before being discharged to the Dartford depot, then transfer to the Hurdcott Camp.  At this camp, Tom was classified as being unfit for active duty, due to his wounds.  On 16 February 1918 he embarked from Plymouth on return to Australia. Rose subsequently was discharged from the AIF on 31 July 1918.  Whilst convalescing in England, Tom had met nursing aide Winifred Elsie May Williams.  Tom and Winifred were married in Perth on 10 February 1919. They had 5 children ( 3 boys, 2 girls ), and worked on their agricultural land at Roelands.  They mainly cropped Potatoes, and carried on dairy farming as a sideline.

Tom Rose was a founding member of the Western Australian Potato Marketing Board and the Roelands Rifle Club/Edgehill Gun Club.   He was a very active member and was an outstanding shot with either Rifle or gun.  During the 1940′s Rose suffered a Heart Attack, which markedly reduced his capacity to perform manual labour. He retired to Australind in a new home and delighted in fishing, prawning and crabbing in the Leschenault Estuary with family and friends. Tom Rose died on the 24 January 1973 in Bunbury at 85 years of age and is buried in the Anglican E section of the Bunbury General Cemetery.

( Special thanks to Peter Hayward Rose for accompanying photographs of his father and his Medals, and biographical content to acknowledge Tom’s service to the Nation and our Community ).

NOTE- Peter joined the RAAF for the Second World War and became a Navigator flying in Liberators, hunting U-Boats in the North Atlantic Ocean.
His brother Frank served in the 10th Lighthorse in W.A for 4 years, and joined the RAAF in 1944, for training as aircrew.