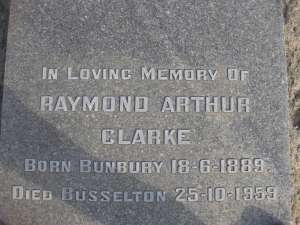 Ray Clarke was born at Bunbury, W.A  on 18 July, 1889, being the sixth born in a family of ten children ( he had five brothers and 4 sisters ). Ray’s father, Ephraim Mayo Clarke was a Farmer and a Merchant who became the first elected Mayor of Bunbury, and subsequently served  as the local Member  on the Legislative Council in the W.A. parliament for 21 years.

Ray spent his early years living in the family home in Stirling Street Bunbury and attended Bunbury Primary School. He rounded out his education by spending 3 years at the exclusive Hale School in Perth. On leaving school, Ray worked on his father’s orchard and potato growing property in Roelands. From 1910 he spent 3 years in the Kimberley district in Northern W.A , working on Liveringa Station, on the Fitzroy River, which was being managed by a cousin. Ray returned to work on the Roelands family property and joined the local Rifle Club, where he proved to be a very accurate and keen shooter.

Ray and his close friend , Tom Rose ( from Burekup ), were travelling to the Annual Rifle Prize Shoot in Kalgoorlie in 1914, when they were informed that War had been declared and the shoot had been cancelled. Both Ray and Tom immediately volunteered and enlisted for Military Service. Both men were assigned to the 11th Battalion and were joined by Ray’s youngest brother, Mervyn Ephraim ( known as Dick ). The 3 soldiers completed their Military Training together at “ Blackboy Hill “ camp in latter 1914. They embarked from Fremantle on the “ Ascanius “ on 2 November 1914 on transfer to Egypt. Further training was then undertaken, including an elimination shoot involving the entire 20,000 First Division of the AIF.  This shoot was to identify the elite sharpshooters who were to act as snipers in the battles ahead. Tom Rose won the shoot and Ray Clarke was runner-up.   When this additional training was completed, the men were primed to take on the upcoming iconic battles on the Gallipoli Peninsula.

Ray Clarke went on to serve his time on Gallipoli in a snipers role, and is credited with killing many Turkish snipers. Ray’s only spell from Front Line Duty during the 8 month long Gallipoli Campaign, came when he was appointed to special Duty as a personal Security Guard to the Allied Commander, Sir Ian Hamilton for 1 week while the leader was on the Peninsula. Ray was  a Private when he landed on Gallipoli, but his actions had earned  him promotion to Corporal on 15 August 1915 and again to Sergeant on 7 December 1915. Ray Clarke was one of the few original men of the 11th Battalion at Gallipoli, who was not evacuated due to sickness or wounds, or killed in action.

Ray was further promoted to Second Lieutenant on 12 March 1916 and appointed Bombing Officer for D Company, prior to the troops being transferred to the Western Front. Ray was party to one of the first raids the AIF made in action in France, near Armentieres. Subsequently, Ray was part of the First Division AIF which was engaged in the battle on the Somme, and at Pozieres, the 11th Battalion lost over  700 men . Ray was the only Officer in D Company able to walk out of this battle unaided.

The First Division proceeded to be involved in a second battle on the Somme at Mouquet Farm, where they again took heavy casualties. It was during this battle that Ray Clarke was recommended for award of the Military Cross. Correspondence from Sir William Birdwood and Winston Churchill acknowledged Ray’s actions and included Mentions in Despatches. Ray was promoted to Lieutenant on 15 June  1916 . He was then appointed Bombing Officer for the Third Brigade in 1917 and saw action at Bullecourt. His expertise and success in the field , led to his appointment as Chief Bombing Instructor for the whole First Division AIF.  He had been mentioned in a despatch by Sir Douglas Haig of 9 June 1917. In a very ironic twist of fate, Ray was severely wounded whilst judging a bomb throwing contest around that time. A bomb had failed to explode during the competition, and whilst Ray and 3 helpers were investigating the cause, the bomb detonated and 2 of his assistants were killed. He was immediately rushed to a nearby Military Hospital for treatment for a number of intestinal, thigh and groin wounds. After being near death for 1 week, and enduring a lengthy period of convalescence in London General Hospital, Ray was repatriated to Australia in early January 1918 aboard the “ Port Darwin “.

During the next 5 years Ray had a number of operations to remove pieces of shrapnel from his body. On 22 September 1918, Ray married Marjory Cecil Clifton and they had 9 children ( 7 boys, 2 girls ). They initially settled on a 140 Acre block provided by Ray’s father, and he was doing fairly well with his potato growing, until the Depression years hit the family particularly hard.

Ray had continued his interest in Rifle shooting and won the Kings Prize in W.A in 1923. During this time he was also the Captain of the W.A State Rifle Team.  He was also heavily involved in local affairs in roles as a Director, Chairman and President, as well as carrying out duties as a Justice of the Peace.

On the outbreak of the Second World War, Ray was called on as part of the Officer Reserve, to be musketry instructor at Northam for some months. In October 1941 he was appointed a Captain, and made Officer In Command of the Garrison at Port Hedland. There was a Japanese air strike in July 1942, killing one soldier, but there was no further action and Ray was discharged from the Army on 17 May 1943.

Ray had returned to the Family farm following the Second World War, and benefited from a number of very good potato crop seasons, handled by his sons Danny and Bruce. Ray purchased a holiday cottage at Augusta in 1949 and pursued his interests in shooting and recreational fishing. It is amazing that Ray finished third in the W.A Queens Prize shoot at Swanbourne in 1957 at the age of 68 years.

In a further touch of irony, Ray collapsed and died on the Busselton Rifle Range in 1959, aged 70 years, shortly after scoring the possible score from the 500 yards mound. Rays funeral was attended by a large crowd within the ground of the Bunbury Cemetery on  27th  October 1959.

( A special thank you to Danny Clarke for contributing content of this Biography ).