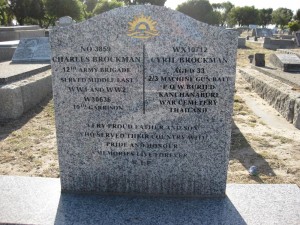 Charlie Brockman was a labourer from Glen Iris, Bunbury when he enlisted in the Army  ( Service No. 3859 ) on 24 August 1915. He was part of the 12th reinforcements  of  the  16th Battalion who embarked from Fremantle on 22 December, 1915 to serve in the Great War.

He was initially posted to Armentieres  and Pozieres  on the Western Front , in France , as a gunner, prior to his appointment as a driver in May 1916.  Charlie was transferred between the 12th,  24th and 112th Howitzer brigades Field Artillery batteries as a driver for the remainder of the war. He returned to Australia and was discharged from Army service on 31 August 1919.

During the Second World War , Charlie enlisted for service at Bunbury on 13 October 1940, being attached to the 29th and 19th Garrison Battalions , eventually being discharged from active service on 15 December, 1943.