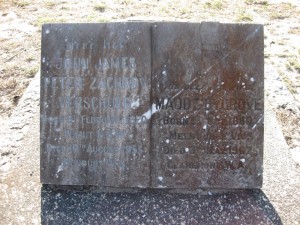 Jack Verscheur was born in Adelong, New South Wales in 1870, the son of  a Dutch Doctor who arrived in Australia in 1853.  His mother had emigrated from Scotland in 1857.

Jack shifted to Western Australia in 1896, gained employment with the Union Bank, and served in the Perth, Cossack,Roebourne and Kanowna Branches prior  to his transfer to Bunbury in 1907.

Jack and his wife Maude ( married in Kalgoorlie in 1905 ) immediately fell in love with Bunbury, where  they decided to raise their family of 5 children, whilst declining further opportunities for promotion and transfer within the Banking industry.

He retired from the Bank in 1932 and was elected a Bunbury Councillor in 1934. Subsequently, Jack served as Mayor of Bunbury from 1935- 1937 , and Verscheur Place  in Bunbury is named in his memory.

Jack Verscheur died in Bunbury on 10 August 1955 at the age of 86 years and is interred with his wife Maude.