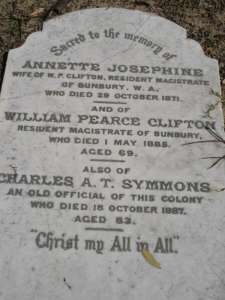 Charles Symmons arrived in the Colony in 1839 with his wife and 3 children.

He served in Bunbury as the Protector of Natives from 1841 and sent glowing reports to the Local Colonial Government and to the United Kingdom regarding white/native inter-relations and the Natives positive assimilation into white society.

However the truth of the matter was reported as follows:- “ Symmons  compassion for individual Aborigines was over-shadowed by his  equally typical intolerance of the way traditional Aboriginal society impeded orderly progress of European civilization. In practice, under his guidance, the policy of protection became one of coercion “.

Symmons later served as Resident Magistrate in both Geraldton and Fremantle, before he died in Bunbury in 1887 at the age of 83 years.

Charles Symmons was interred in the Bunbury Pioneer Park Cemetery on 18 October 1887, however, later development at that site, saw his Headstone Memorial re-located to the  Pioneer Cemetery Section in the Bunbury General Cemetery, work being completed in 1986.