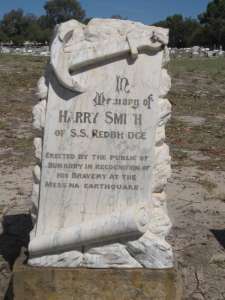 Henry Smith was an English sailor who failed to board his ship, the “S.S. Redbridge “ prior to its departure from the Port of Bunbury in 1911.  His body was found some months later  and the autopsy concluded  he fell and struck his head  whilst boarding the ship and became entangled in the timber of the jetty.

Smith had been awarded the Albert Medal for bravery and was due to be presented with the Medal by the King on his return to England.

Henry Smith and his fellow crew members were anchored in Messina Harbour , Sicily  in late 1908, when a terrible earthquake and tidal wave struck, wiping out the City and killing thousands of inhabitants.

Smith and crew rowed ashore after the quake and spotted screaming children atop a tottering 5 storey building. After arranging to have a rope secured to the balcony rail, Smith ascended the rope, and together with his Chief Officer, was able to evacuate all children safely to the ground. Four minutes after Smith arrived back at Ground Level, the building completely collapsed.

Henry Smith was interred in the Bunbury Pioneer Park  Cemetery, however, later development at that site saw his headstone Memorial re-located to the Pioneer Cemetery Section of the Bunbury General Cemetery, work being completed in 1986.

(The  cost of the original Memorial Headstone  construction ,was met from Donations made by the Bunbury public, once they had become aware of Smith’s bravery and tragic death).