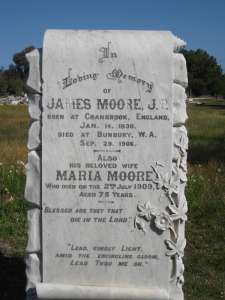 James Moore emigrated from England in 1842, with his parents, aboard the vessel ‘ Diadem “, as part of the proposed Australind settlement.

Moore was employed by the Reverend John Wollaston prior to venturing out to become a successful businessman.

James Moore was elected a Councillor on the first Municipality of Bunbury Council in 1871.  He was later elected as Mayor of Bunbury for 1897- 1898 and his rotation as Magistrate in the local Courts kept him busy.

Moore is fondly remembered for this quote in Perth in 1905:- “ Bunbury is a nice little place and well laid out, but when you have been dead as long as Bunbury, you will be nicely laid out too “.

James was the father of Newton Moore( a local High School is named in his honour ), who also became a local Councillor, then elected as Lord Mayor, prior to election as a local member of Parliament, and then assuming the role of Premier of Western Australia from 1906- 1910.

James Moore was initially interred in Bunbury’s Pioneer  Park Cemetery on 29 September 1906 ( aged 76 years ), however, later  development of that site, led to transfer of his headstone memorial to the Pioneer Cemetery Section of the Bunbury General Cemetery, which  was completed in 1986.