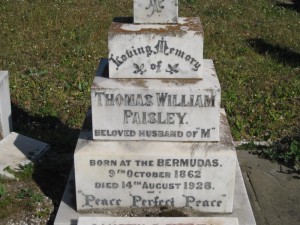 Thomas Paisley arrived in Bunbury in 1881 and took up an appointment as the first Government School Teacher.

A new Bunbury Boys School was constructed in 1887 at the corner of Stephen and Arthur Streets ( now known as the  Paisley Centre ).   Thomas was appointed the inaugural Headmaster , a position he held for over 20 years.

Paisley made a significant contribution to Bunbury by his devotion as an educator, and also had considerable influence within Bunbury society.

Thomas Paisley was a Justice of the Peace, an Anglican lay preacher and a founding committee member on a number of Associations and societies.

He took early retirement from the teaching profession and was successful in being elected  a Town Councillor from 1914- 1926. Thomas Paisley died in 1928.