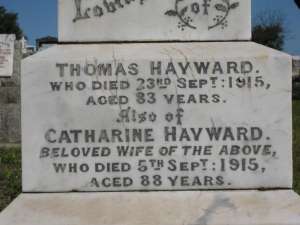 Thomas Hayward migrated from England, arriving at Fremantle on the “Devonshire “ in September 1853. In his early years in Western Australia , he had tried a number of ventures in sheep and cattle from Northam/York to south of Mandurah, but without success.

In 1859, he acquired a farm property of 1674 Acres near Wokalup, then in 1861 married Catharine Logue, with whom he had 7 children. Their wedding gift from her parents was a herd of dairy cattle which set the family on their path to prosperity.

Thomas decided to set up his own business in Bunbury in 1862, and began to import farm machinery and implements from Manufacturers he had known in England. He then built a large new store which sold almost everything, and was advertised as follows:- “ Merchants and Importers, Drapers, Outfitters, Grocers etc, Oilmen’s Stores, Machinery of all descriptions, at Victoria Street, near the Jetty”. Once the business was comfortably established, Thomas handed control to his son Thomas Junior, and primarily remained as a Farmer on the family property.

In 1874, Thomas Senior was drawn to live next to the business premises near the Bunbury wharf, due to the increased custom at the Store, and the prosperity from the Gold boom, which had over-ridden the effects of the Economic depression in the 1870’s.

He was a Justice of the Peace, and at various times held every senior position in the Local Government of the Wellington District. He was an original director of the Bunbury Building Society in 1882 and the Chairman from 1885- 1913.

Thomas Hayward died in Bunbury on 24 September 1915 leaving a legacy of benevolence and public spirit that had won him the respect of many friends and business customers.