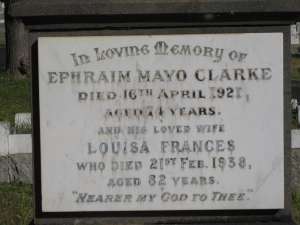 Ephraim Clarke was born at ‘Parkfield” Australind in 1846 to father Ephraim  Mayo Clarke Senior and mother Sarah. The Family migrated from England as members of the initial Western Australian Land and Emigration Company settlement at Australind.

Ephraim worked the land with his father until he decided to open a Retail store in Bunbury in 1874. He built a new shop in 1880, which became a very successful business, and developed a flourishing vegetable and flower garden. He also established  a productive  vineyard at his South Bunbury location.

Ephraim became the First elected Mayor  of Bunbury in 1888, spent 27 years on the Council, achieving 6 terms as the Mayor. He was a Committee Member on many Boards of the day, and was a Member of the Legislative Council for the South West Province from 1901- 1921.

Ephraim also managed to find the time to be Secretary, Treasurer and active member of a number of other Clubs in Bunbury during this period.

He married Louisa Teede in 1876, and together they had 12 children, 10 of whom survived beyond childhood.