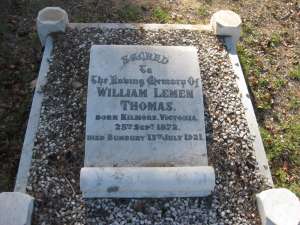 William Thomas opened the first Chemist ( Pharmacy ) in Victoria Street Bunbury in 1905 ( this business premises had continuously been in the Thomas family hands until 2012).

Thomas was elected as a Municipal Councillor from 1906- 1908. He was the MLA for Bunbury from 1911- 1917, winning the 1911 Election for the Australian Labour Party on a platform of free education and security of leasehold ownership for long-term tenants.

His re-election in 1914 was credited to an energetic advocacy for railway and harbour improvements . During his terms in government, Thomas successfully mobilised women’s interests and championed their involvement in Politics.

William Thomas was elected Mayor of Bunbury for 1918- 1919 and was re-elected in December 1920. He had taken the role in the face of claims that Council faced serious liquidity problems. These claims included long term unpaid rates, public facilities were inadequately maintained , problems with the Electricity Department and Council were facing a significant deficit.

Thomas collapsed during a meeting  with the Electricity Department in July 1921, and died the next day following surgery. He was only 48 years of age at the time , and it was generally considered  that the stress of the meeting had contributed to his death.

William Thomas was fondly remembered, with Thomas Street in Bunbury named in his honour.