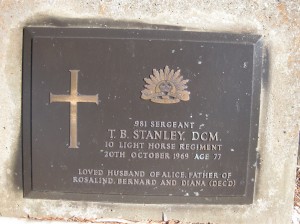 Thomas Brooke Stanley was born at Stocksbridge, in Sheffield, England on 12 May 1892 as the first and only child of Arthur and Clara Stanley (nee Brooke). Sadly his mother died within days of his birth. In England, he was always referred to as Brooke, in memory of his mother. Brooke’s father Arthur remarried and a second son Edward was born. Tragically Arthur’s second wife also died. Arthur married a third time with a daughter Helen born into the family.

Brooke’s early schooling was at Bolderstone and later at the National Schools in Elland. First employed in an Engineering firm in Elland, Brooke then worked in a Solicitor’s office where he learnt something of legal jargon and the neatness of the writing of Deeds. This is probably where he developed good record keeping along with the magnificent handwriting, letter writing and advocacy skills that he put to much good use in later life. Prior to his migration to Australia, Brooke also worked on his grandfather George Stanley’s farms Underbank Hall Farm and Sheephouse Farm, receiving a thorough grounding in farm work. At this time he also founded the Stocksbridge Scouts.

Following his 21st birthday in 1913, Brooke migrated to Western Australia, arriving in Fremantle on 3 July 1913. In Australia he became known as Tom rather than Brooke. He first worked as a farm hand for Mr Ben Wright at Jitarning near Wickepin and then for the Piesse family at Kobeelya in Katanning and at Kwobrup, 40 miles further east. When War was declared in 1914 Tom told Cecil Peisse that he was going to Katanning to enlist but Cecil told Tom that he was doing more good growing wheat. The Recruiting Officer in Katanning was Cecil’s brother Harold Peisse who ensured that Tom was turned down. Tom however was not prepared to give in that easily and caught the train to Perth where he was enlisted at Blackboy Hill.

Knowing signalling (Morse and Semaphore) Tom became a Regimental Signaller for the 10LHR and was sent to Broadmeadows Camp near Melbourne. After training he embarked from Melbourne via Adelaide to arrive in Albany for Easter 1915 where he was allowed Leave to attend the Easter Sunday Service in the beautiful Anglican Church in Albany. He also managed a quick train trip back to Katanning before sailing from Albany to Perth where he departed for Egypt on 24 April 1915; the day before his mates first landed at Gallipoli.

Tom’s service on the peninsula was noted with two Special Mentions in Despatches for ‘gallant and distinguished services in the field’ and a Distinguished Conduct Medal. On 29/30 August 1915, in the Battle of Hill 60 (Kaiajik Aghala), Tom was a member of a party which held an important point for 37 hours, during which time there was almost incessant hand-to-hand fighting. Tom displayed great coolness and bravery, and when finally a withdrawal was necessary he was last to leave the trench. In recognition of his conspicuous gallantry Tom was awarded the Distinguished Conduct Medal in the Battle of Hill 60 alongside others including Hugo Throssell who was awarded the Victoria Cross.

Suffering from severe bomb shock, Tom was evacuated unconscious from Gallipoli to be treated in hospital in Egypt. There he was subjected to ghastly treatments including electric shocks to release congealed blood associated with his head injury. He had been reported ‘missing, believed killed’ and he is actually listed as Killed in Action on the Katanning War Memorial. His relieved loved ones received a note written on the back of a cheroot box which the family still have today. Reassuringly, it was dated after the date he ‘went missing’ stating:

Dear Aunt Jennet and all,

Suffering from shock and debility result of last charge. Not hurt and not real bad. Guess I must be as thin as you are but I ‘mafished’ [finished] 4 poor Turks and never used the steel. Winning slow but sure. Weather getting cooler.

Amazingly Tom returned to Gallipoli one last time. It grew colder and damper with frost and greasy clay. Casualties, continued to thin the line with few if any replacements. He later wrote:

Gently it snowed that night and you can imagine what the saps were like underfoot and the efforts to make a fire with nothing dry… Everyone resigned himself to the obvious inevitable … we were there for keeps. But the routine went on, with not much diversion, and a very lightly-manned front line, where it was necessary to make extra noises of all sorts and send a few extra bullets whizzing out from one point and another to give the enemy the idea of an un-manned line appearing to be manned.

Then came the Great Silence… three days and three nights were prescribed. No shovelling of sweepings, no speech – only signs, no hot drinks or food, no smokes… Did they think we were preparing to come bouncing over, and where? Blankets were rigged and just tossed casually down with booby string attached to the pin of a bomb and other man traps to lure the Turks out – but none came.

On the third night all was ready to defend the front line and stay there to repulse what seemed inevitable – a last rushing crush of an overwhelming weight of numbers which would just wipe us out. Then a terrific storm burst through the blackness making the following blackness seem the more intense. Out at sea a destroyer had a searchlight trained on their left flank…and that light moved in an arc along their whole front… Terror overcame the Turks; a great bonfire appeared and masses in full view pleading with Allah to save them.

We could have slain them one by one, few as we were, but not a shot was fired and when the storm subsided we filed down…one long thin line to the Beach… and a boat… waving Goodbye from a place which had seen a play of pawns holding a useless flank on a vast chess board… and proceeded once more to Heliopolis race-course and recuperation.

Following the Evacuation from Gallipoli Tom served with the Australian Stores Depot on Ghezireh in Cairo, Egypt. As a part of his duties he cared for the Shellal Tiles that were recovered from Gaza by the 10LHR. He had the Ancient Greek inscription translated and arranged for a mosaic expert to carry out some restorative work. After considerable debate about who should have them he was finally authorised to pack the tiles and have them transported to Australia where they remain in safekeeping at the Australian War Memorial. The Stanley family have treasured photos that Tom took whilst preparing the Shellal Tiles for shipment.

Finally Tom embarked on the Lucie Woermann at Port Said on 12 December 1919 arriving in Fremantle on 13 January 1920. He was discharged from the army on 12 April 1920 taking up a virgin bush property in Wellesley Road Brunswick Junction. In Perth on 17 November 1921 he married Alice May Hicks from Loftus in Yorkshire England, having met her in Egypt during the war. Together they had three children and developed an outstanding dairy farm.

Life was full of challenges including the loss of their 18 month old daughter Diana who drowned in 1930. Tom never fully recovered his health after the war. By 1939 he was unable to undertake any further physical labour and the physical work of the farm was undertaken by his wife Alice and 13 year old son Bernard. Tom however maintained an active role in the running of the farm as well as strong community involvement. He was a member of the RSL for more than 50 years, a strong advocate for ex-servicemen through the land settlement scheme and an executive member of the milk section of the Farmer’s Union. A Lay Preacher for St Peter’s Anglican Church in Brunswick Junction, he wrote ‘A short history of St Peter’s Brunswick’ for the church’s 50th anniversary. He also founded Scouts in Brunswick Junction and was a great supporter of community organisations including St John’s Ambulance. Later in life Tom studied Braille, receiving a Certificate of Proficiency from the National Institute for the Blind. He translated books to facilitate study for the blind.

Tom passed away in Harvey Hospital on 20 October 1969, aged 77 and was buried in the Bunbury Cemetery (Anglican B278).

Perhaps Tom’s greatest legacy stemmed from the writing and recordkeeping skills first gleaned working in the solicitor’s office in England in his youth. Indeed Tom dedicated much of his life to recordkeeping and the records he created are now valuable resources in the State and National Libraries. His son Bernard was not only a successful farmer in his own right but also used Tom’s historic records to publish a history of the Brunswick community, ‘When Blue Was True’. Tom’s legacy lives on.