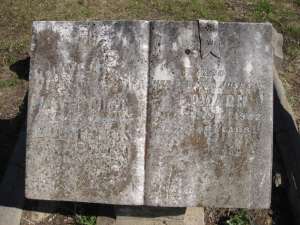 Edward Withers arrived in Bunbury in January 1864, as a 7 year old boy.  His father Reverend Joseph Withers ( Anglican Priest )was the Chaplain on the convict ship ( “Dalhousie” ), and other passengers included Edward’s mother and 2 siblings.

Edward “Ted “ Withers played a very important role by diarising many of Bunbury’s early events.  His writings on the local Aboriginal population,  convict working parties involved in road and bridge building and construction of the Bunbury railway line are enlightening.  He recalled there were only about 20 houses in the main street of Bunbury when he arrived in 1864, and went on to record many details that are important in documenting Bunbury’s early history.

Ted spent a number of years after his retirement from the workforce to write his memoirs, including his involvement with the well-known poet/story teller Adam Lindsay Gordon.

Ted’s Grandson, Reg Withers was a Liberal Senator  for Western Australia from 1967 and became Leader of the Opposition in the Senate in 1972.

The original Withers dwelling still stands near to the Rathmines Church that was  under his father’s  control and guidance after construction.

Ted died in 1942 and is interred in the Anglican B Section of the Bunbury General Cemetery.