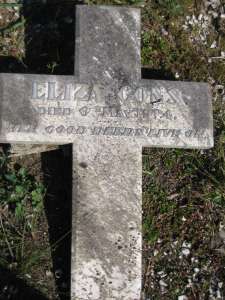 Eliza Cons arrived in Bunbury from England in 1888. She had been summoned to care for  her sister Esther ( wife of Robert Forrest ) to come to Australia to help her after she had become a semi- invalid , due to a horse-riding accident.

Eliza moved into a lodge ( located on the current Clifton Beach Hotel site ) and soon became involved in the Church of England and the Womens Christian Temperance Union.

She also quickly saw the need to provide activities for the numerous seamen on  shore leave who were arriving at the busy Bunbury Port. Eliza formed a Committee to raise funds to establish  a “Missions to Seamen” facility, and the initial concert was held  in the Masonic Hall in 1890.

Over the next 10 years , she rented rooms at the Gordon Hotel ( now the Reef Hotel ), for sailors to read books, write letters home and attend concerts, away from typical Hotel temptations. The “Sailors Rest” officially opened on 22 October 1900.

In 1904, Eliza, together with Thomas Hayward and Robert Forrest, purchased a vacant block of land on the corner of Wollaston and Ommaney Streets. On 27 January 1905 building of the new “Sailors Rest” began, after Eliza’s sister Emma ( a prominent Opera Singer in the United Kingdom ), sent funds to pay for the stonework.  Emma was responsible for setting up the universally Famous “Old Vic Theatre “  in London .

The New “Sailors Rest” building was completed in late 1905, and weekly concerts began at once. Eliza performed her role as a talented pianist, with accompaniment from vocalists, instrumentalists and a local choir.  The building’s design included the Concert Hall, reading and writing rooms for the sailors, a Matrons room and a kitchen.  Dances were also held regularly at the venue.

Eliza inherited sole ownership of the building in 1915, whilst she was employed as Secretary of the Bunbury Diocesan Trust. When she retired from this role in 1920, she transferred the Title of ownership to the Trust. The “Sailors Rest” building stood on its original site until 1964, and this site is now part of the re-invigorated Marlston  Hill Commercial/Residential precinct.

Eliza Cons died in 1924 and is interred in the Anglican B Section of the Bunbury General Cemetery.