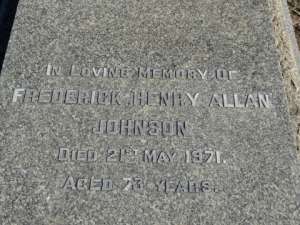 Fred Johnson was born Abbotsford, Victoria on October 22nd, 1897. Two years later he moved with his parents to Perth. From 1903 he attended Perth Boys Central School. In 1910, Fred won a scholarship to Perth Modern School, which he attended until 1914. In 1915, he became a trainee teacher at Thomas Street Senior State School. On his 18th birthday he took unpaid leave from the education department and joined the AIF.

Fred joined the AIF as a gunner in the 107th Battery, 23rd Field Artillery Brigade. Initial training was at Claremont using the Claremont show ground as billets. In February 1916, the unit moved to Maribyrnong, Victoria for more advanced artillery training on the 18 pound field gun. After 3 months, the unit departed for England aboard the HMATMedic arriving in England in July 1916.

In England Fred joined the Australian 3rd Division which was undergoing training at Lark Hill on the Salisbury Plains west of London. He stayed here until New Year’s Eve 1916 where he departed for France as part of the advance guard of the 7th Field Artillery Brigade, 27th Battery.

The brigade moved up to the line in what was known as “The Nursery” south of the Lys River in the Armentieres area of northern France. This was a relatively quiet part of the front where new units could learn the ropes of trench warfare.

Six months later that the unit underwent its first big test with Messines offensive on June 7th 1917. Fred’s unit was part of the preliminary bombardment. The firing went on for seven hours.

“Before and after the stunt we worked continuously. In 4 hour shifts, 4 on 4 off, and during the 4 off we could get no sleep owing to gas. Here I developed the habit of sleeping with a mask on.” Quote from Fred Johnson.

Not long after this on the 11th of June, Fred was gassed, probably with a mixture of chlorine and phosgene. It would be a month before he was fit for service again. The effects of the gas plagued him for the rest of his life.

After the Messines Stunt Fred’s unit took part in the Passchendaele offensive from the end of July1917. Moving the gun in the mud was as big an enemy as the Germans.

“A hard undertaking. It took us 6 hours to move the guns. One being completely submerged in a creek. Ultimately 10 horses had to be yoked to drag the guns across old no mans land. It was a lively spectacle, 10 horses straining for all their worth with verbal and physical encouragement from gunners and drivers.” “

“Whilst on S.O.S that night I went out to the aiming post and there had my braces blown off by a shell burst behind me. The rest of the crew gave me up for lost. But bar from a bit of my braces missing, yours truly came up smiling.”

During the 26 days (29th September – 24th October 1917) the six batteries of the 7th Brigade were in action, they fired 119,430 rounds. Fred’s gun alone fired about 3,400 shells or 28 tonnes of high explosive. During the same period, Fred’s battery lost 8 of their number killed and a further 10 wounded.

On the 6th of November, the Canadians relieved the Australians and finally captured what remained of Passchendaele village.

Fred’s unit were rushed south to Amiens on the Somme in April 1918 to help stem the massive German attack that had broken through the Allied lines. Fred was in England on leave at the time. His leave was cancelled and he was sent back to France.

1925- Gained Bachelor of Arts Degree at University of W. A.