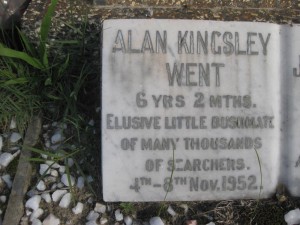 Alan Went was a 6 year old child who went missing from  his Wilga home on 4 November 1952.

The small Wilga Timber community, near Greenbushes had its population swell to 3000, with searchers undertaking the biggest child-hunt in Western Australia, to that time.

The small boy’s body was finally located by a handful of men who had strayed from the designated search path. This location was 13 Miles from the family home and Doctors believed he had walked barefoot, until he dropped from exhaustion.

Alan was a timid boy who may have evaded rescuers a number of times when they had passed near to him, and Doctors felt he may have survived his experience if he had been located a few hours earlier.

The Went family were devastated by their loss, as they had lost another child some years earlier, due to the impact of Diptheria. 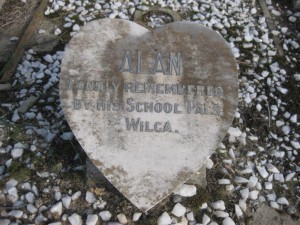 Alan Went had died at Wilga on the 8 November, 1952 at 6 years of age.  A dedication plaque from his school friends is affixed to his grave in the Bunbury General Cemetery.