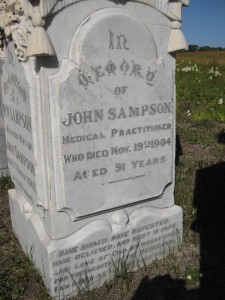 Doctor Sampson  was transported from England as a convict , arriving in Western Australia in 1857. He was convicted at Gloucester in 1855 for uttering forged Bank Notes and was initially sentenced to 15 years in prison. His wife emigrated to be with her husband in 1859.

Sampson became Bunbury’s surgeon and Medical Officer in 1860 and served in this role for 20 years.

He became a landowner and employed up to 20 Ticket-of – leave convicts at any one time.

Doctor Sampson was the organist at the Bunbury Congregational Church and formed and conducted the first Bunbury Brass Band, at his own expense.

He had a number of conflicts with the second generation of the Clifton “ruling elite “.

Doctor Sampson died in 1904  at the age of 91 years  and was interred in Bunbury’s Pioneer Park Cemetery on 19 December 1904, however later development at that site, saw his Headstone Memorial transferred to the Pioneer Cemetery Section of the Bunbury General Cemetery, work being completed in 1986.

“ Have sinned, have repented, have believed

And rest in hope and love of God by whose grace

For the merits of the redeemed I am saved

As all who read this may be saved”.