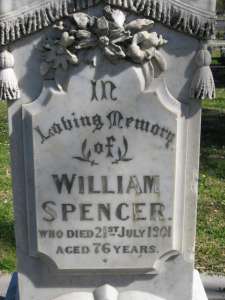 William Spencer departed England as a stowaway aboard the vessel “Trusty “ which arrived in Bunbury in 1842.

His initial employment was as a Shepherd ( employed by John Scott ), before joining the Police Force as a Mounted Constable, prior to acting as a Clerk of the Courts, then spending 3 years as a Tide-Waiter ( Customs Officer).

In 1866, he constructed St Pauls Pro Cathedral, which became a prominent place of worship in Bunbury. William also built the modern emporium known as Bon Marche ( still in business use today ), on the corner of Victoria and Stephen Streets, and subsequently built the fine Wellington Hotel.

Spencer also promoted his entrepreneurial skills by developing the export of sandalwood to the Far East and Jarrah timber to London.

William Spencer became Chairman of the Bunbury Municipal Council, before serving terms  as Mayor of Bunbury from 1872-1875 , 1877-1879, 1881 and 1891/93. Further appointments saw him as Chairman of the Wellington Road Board and MLC for the South West Province from 1896-1901. The Freemasons Lodge elected Spencer amongst their first group of Office-Bearers.

The main connecting road between Bunbury and South Bunbury is gazetted as Spencer Street, appropriately named to honour the important contributions to the development of early Bunbury  by William Spencer.